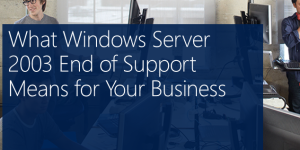 After July 14, Microsoft will no longer issue security updates for any version of Windows Server 2003.

If you are still running Windows Server 2003, you need to take steps now to protect your IT infrastructure.

What does this mean to you?

Microsoft will no longer issue security updates for Windows Server 2003 from 14th July and support will cease. This means no new security updates to the product and, without support, no further product updates for critical systems like anti-virus and network management tools.
Having no support from Microsoft on any network issues means your network will be vulnerable to security threats.
In 2013 alone, Microsoft released a total of 37 critical updates, security updates and hot fixes across their server platforms to keep the system stable and secure.
The key concerns after the end of support are;

Act now!
The key thing is if you are still operating Microsoft Server 2003 that you act now to mitigate any risk of having unsupported, outdated software running your network.
The clock is ticking so to ensure that migration is as painless and successful as possible then this should be started ASAP.
The migration process is fairly straight forward. KS Services can help you deliver this.
For more information contact KS Services;